One the night of 11-15-19 Chester Township Fire Department was called to a residence for a dog stuck in the mud near a pond. Crews arrived on scene and found the dog partially submerged in mud. Crews donned life jackets and rope-rescue gear, and made entry into the pond. After 10 minutes, crews where able to free the dog from the mud. Once the dog was freed, crews assisted the owners with washing the mud from the dog. 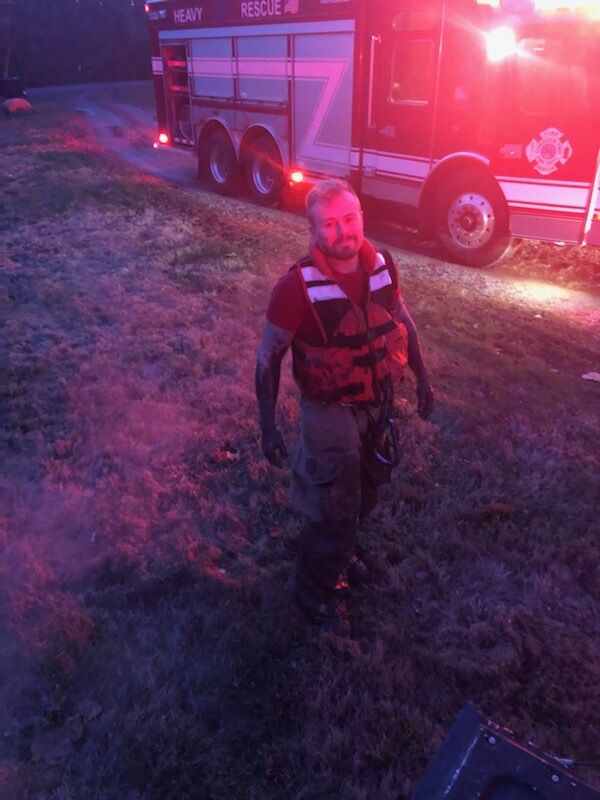 Chester Township Fire Department responded to a local gas station for the report of a vehicle fire. Crews arrived on scene and found a pick up truck partially involved. Crews had a fast knock down of the fire and remained on scene for 30 minutes. No injuries where reported. 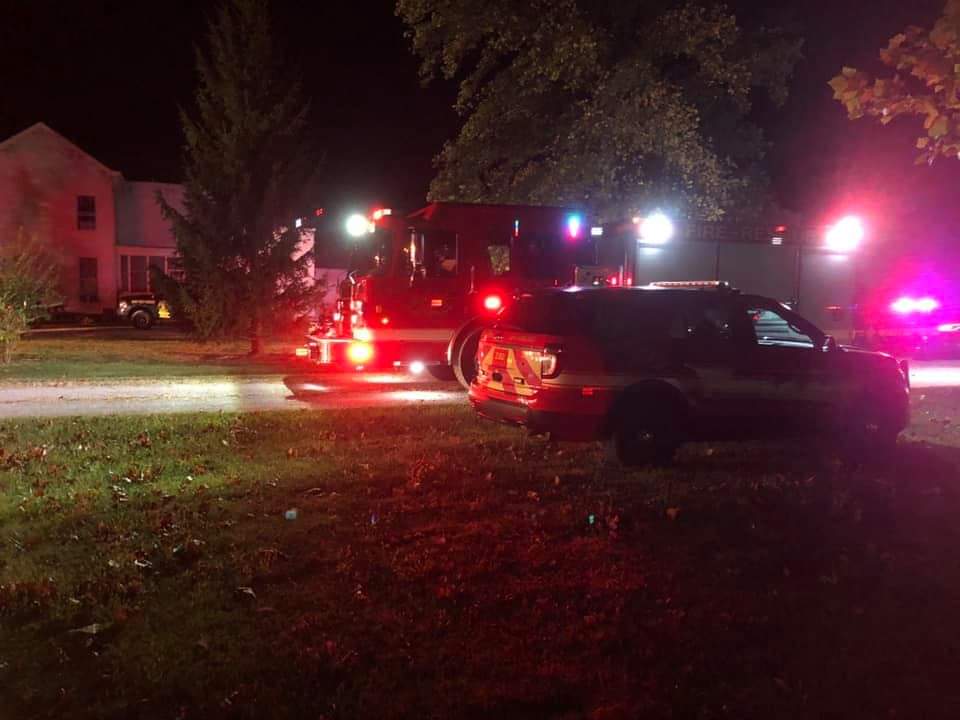 On 9/29/19 @ 4:40 am, Chester Twp Fire Dept was dispatched to a report of a structure fire at 4645 Ohio 380. The first engine and tanker arrived on scene at 4:45am and found light smoke conditions to the South side of the residence. Upon efforts of an interior attack fire was located in a down stairs bedroom and an upstairs bedroom. 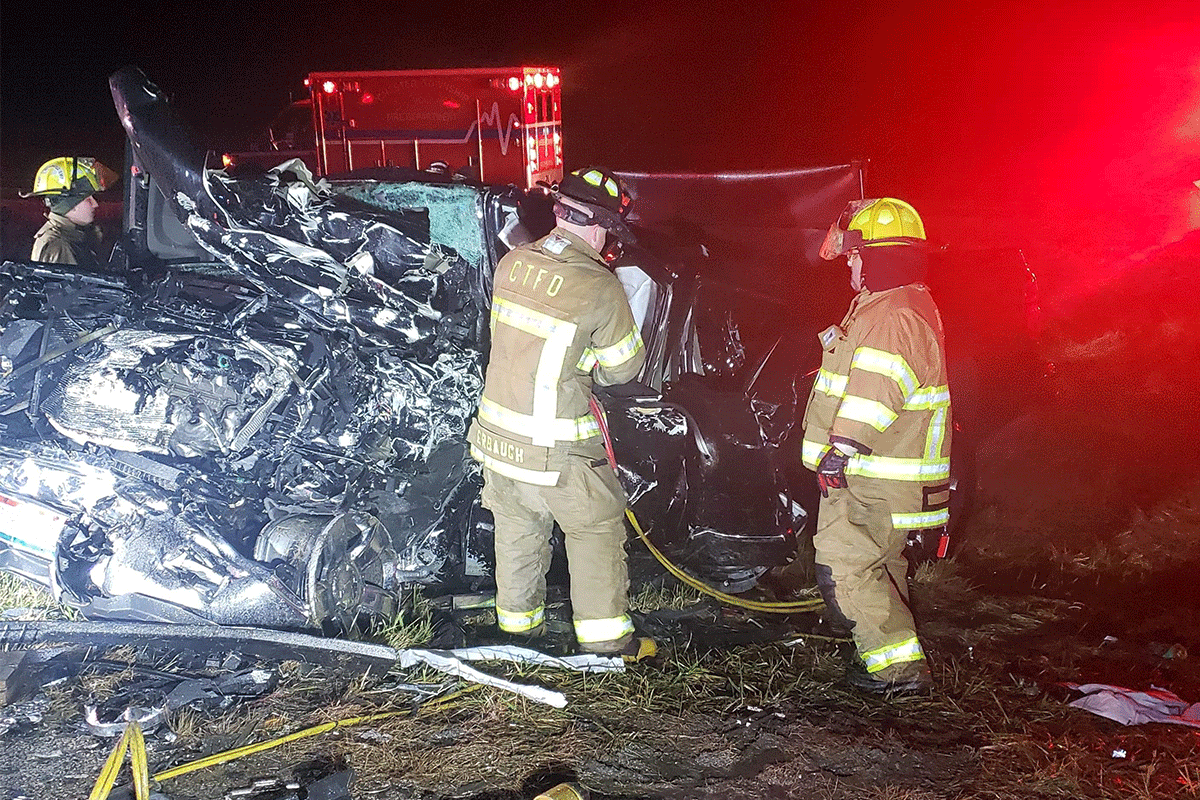 12/15/2018 - On the morning of December 15th around 1am, Chester Township Fire Department was dispatched to a vehicle accident on I-71 in the Northbound Lane with unknown injuries. Within Moments after the call, Squad 54, Engine 51 and, Heavy Rescue 57 went enroute to the Scene. Upon arrival, Crews found three vehicles with heavy front-end damage, along with a camper that also sustained damage.
Unfortunately, the driver of the dark-colored vehicle had lost his life and was pronounced dead at the scene. The driver and passenger of the red vehicle had multiple injuries, and had to be extricated from the red vehicle. Accident victims were then transported to local hospitals. Additionally on-scene, we had one other patient which sustained minor injuries, and refused transport.
Chester Township Fire Department would like to thank Clinton-Warren Joint Fire Department and Massie Township Fire Department for providing critical Mutual-Aid at the Scene.
Read more... 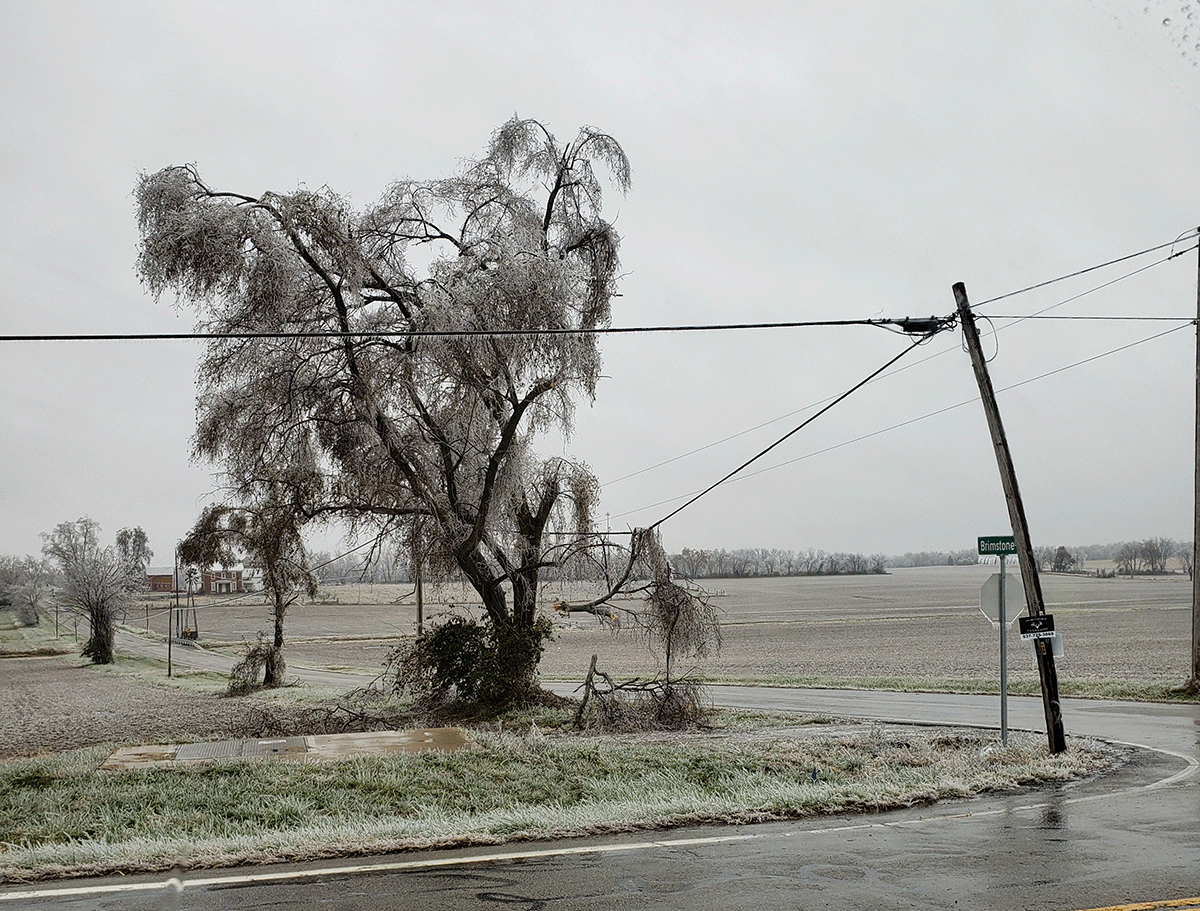 11/15/2018 - Crews from Chester Township Fire Department were out most of the morning on 11/15/2018 during the ice storm. Crews responded to multiple calls for trees and phone lines down, as well as power lines down in multiple locations. 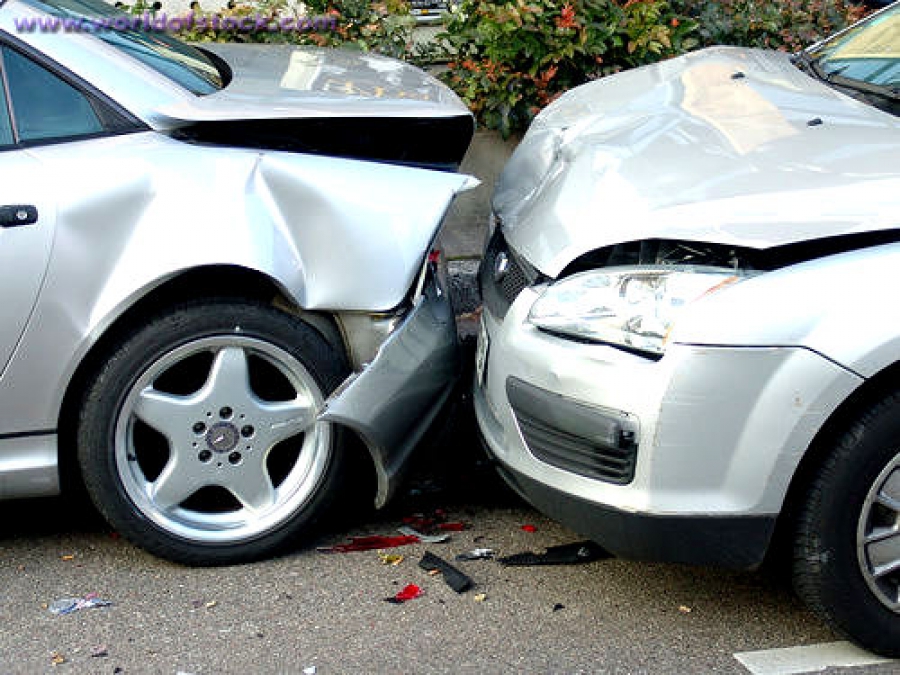 On July 18th 2018 at approximately 11am, Chester Township was notified of a vehicle incident with injuries and possible fire. Responding units transported some individual(s) to the hospital while our fire team evaluated the area for fire risks. Vehicles were undrivable, and were towed from the scene as directed by OSP. 73 and 380 suffered some traffic delays for about an hour.

Remember to buckle up Ohio! 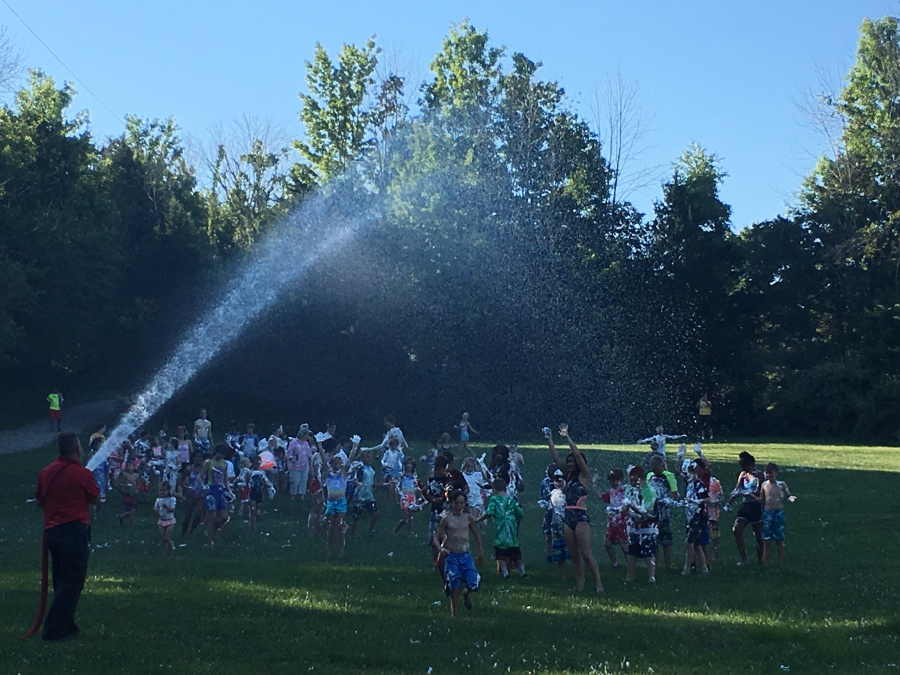 On July 19th 2018 the Chester Township Fire Department was invited to Camp Kirkwood for a youth celebration. Kids from all around attended the camp and had a HUGE shaving cream event. Kids were covered from head to toe in lathered shaving cream. It was an amazing sight. The Fire team helped hose the kids off before they all jumped in the pool for a fun evening of games and activities. Chester Township values our local business owners.  We are thankful to have such a great relationship with our community. Thanks again Camp Kirkwood for all that you do to help mold our youth! 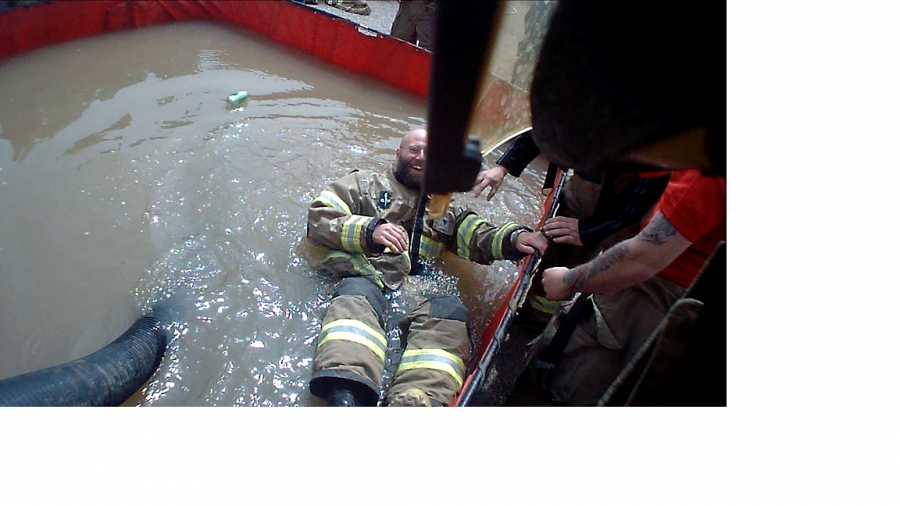 Drafting is where Engines, Tankers or Tenders pump water from a pond, lake, pool or other static water source.

Training in drafting is VITAL for rural departments as we do not have pressurized hydrants like big cities do.   When there is a fire, rural departments have to draft and transport thousands of gallons of water to the scene of a fire.

Despite all of our hard work that day... We did find time to "dunk" the new guy (Justin) as part of his initiation into the department.

Fire at the 73 Grill 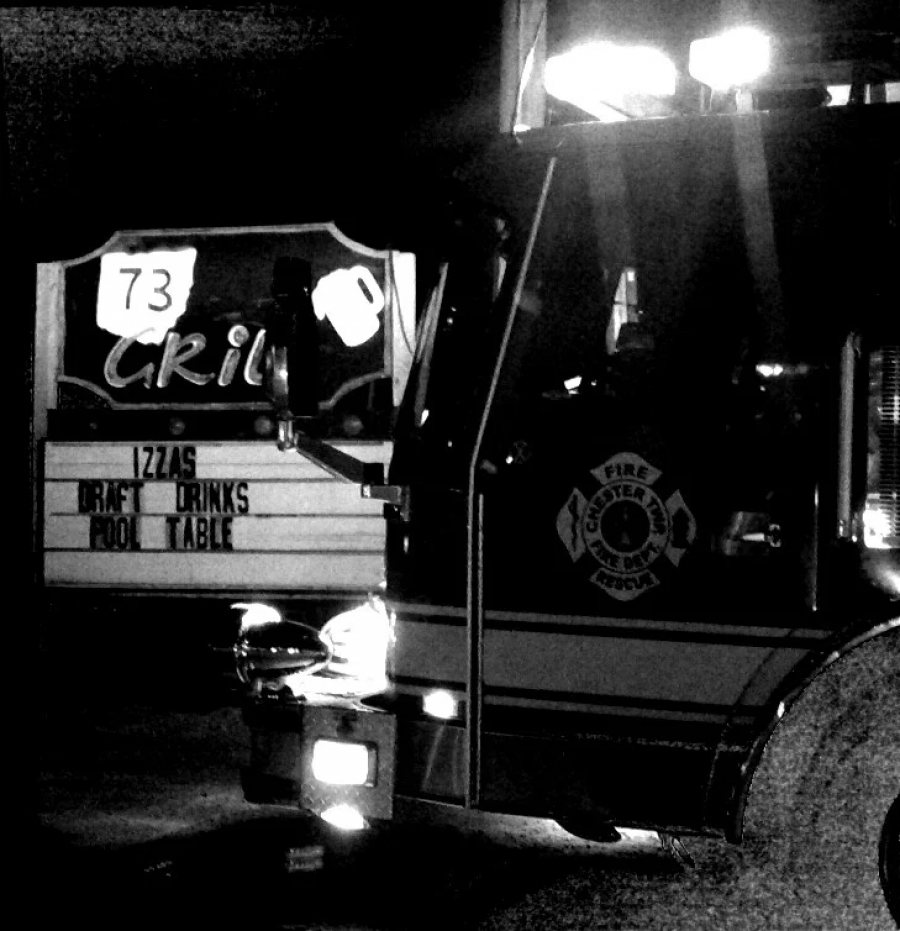 It was the early morning hours of Thursday July the 19th when Chester Township Fire and EMS staff were returning home from an earlier medical run. One of the team members of Chester Township Fire (Becca Spencer) was on her way home and noticed smoke emitting from 73 Grill (our local family based eatery). She sounded the alarm and crews quickly arrived to find an active fire. Because of the attentiveness of Fire Fighter and EMT Becca Spencer, our local eatery was saved. Her early notification may even result in 73 Grill being open today.

"Great Job!" doesn't even begin to describe the outstanding commitment the Spencer family has in safe guarding our community. So next time you see Becca, be sure to thank her for saving the place that has AMAZING Steak Hoagies!

This years Fire Fighter class was filled with some great people from surrounding departments.

One couldn't have asked for a better bunch of guys to go through training with.

A BIG SHOUT OUT to all the other regional fire fighters who came down to help train up "the new guys" and share their years of experience. 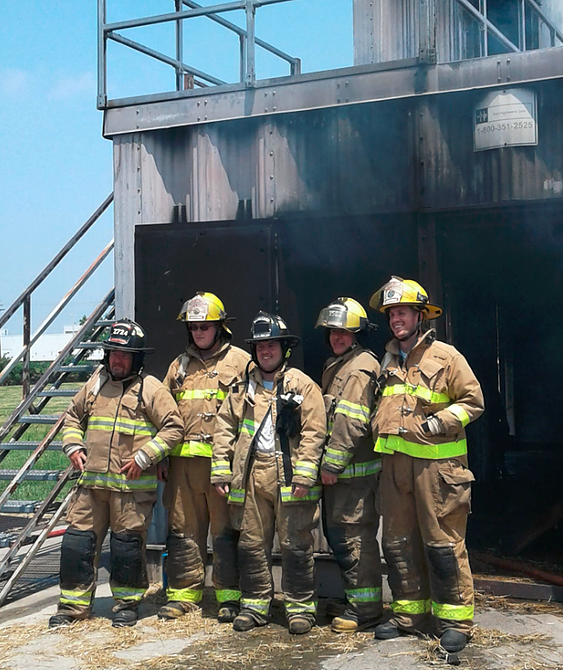